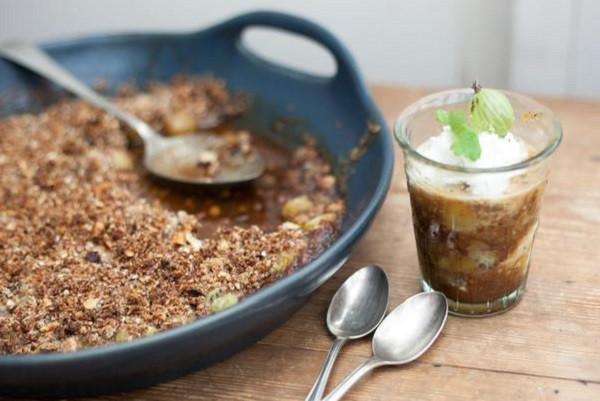 What a great year it’s been for gooseberries, this year! We’ve inherited an old gooseberry bush that’s blooming; it is full of ripe juicy berries. They took a while to pick but the question is…what do we make with all these berries?

We’re not exactly experts in the gooseberry field, so we had to do some research and have a little think and eventually decided on a gooseberry crumble. We’ve been wanting to make a good gluten free crumble for some time, so this gave us a good opportunity to try it out.

The crumble itself has been influenced by Sarah Raven; who is known for her gardening skills but she’s also a great healthy eating cook and has developed some really fantastic recipes. We’re big fans and have adapted her light cheesecake into a gooseberry crumble. It might sound strange but Sarah’s cheesecake had a crumble topping that was gluten free and worked perfectly with the gooseberries. We were a little surprised by how great this crumble is and a small slice turned into a second bigger slice…

For the crumble (from Sarah Raven)

We’re sure you’ll enjoy this one!